At 3:30 a.m., you might not think there would be many people on the roads. But Monday through Friday, there is at least one person you will see: Tom Parkinson, Kansas Public Radio’s Morning Edition host.

Fueled by numerous cups of coffee his gastroenterologist wishes he would cut back on, Tom is the lone soul in the studio most mornings as he preps and delivers the morning news for KPR listeners. Every work day, Tom spends the first few hours without interacting with anyone. Of course, every time he turns on the microphone, he’s technically speaking to tens of thousands of people who are listening to him. His first human-to-human interaction most mornings comes at 9 a.m. That’s when he hands-off his on-air duties to the next announcer on the next show.

“It’s kind of odd because I don’t see another human being, generally, until I’ve been here for almost five hours,” Tom says. “Usually the first person I talk to is Darrell Brogdon, who comes in right before 9 o’clock. Sometimes the first words we say to each other are on the air.” 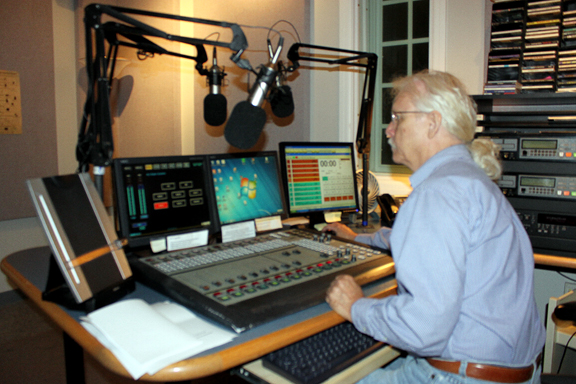 By his own account, Tom has always been a morning person: cumulatively, he’s hosted Morning Edition for almost 20 years in four different states and in three different time zones: Kansas, California, Ohio and Florida. He’s always enjoyed the solitude of the morning hours, although in his youth, as a bartender and musician, he “saw the early morning hours from the other side.”

“I love that time of day,” Tom says. “I always have. It’s nice to have the autonomy. I’m here by myself. A lot of people don’t realize that. It has its pros and cons, but I like it. I really like Morning Edition. I think it really provides a valuable service to the community. People want to know what’s going on.”

As night turns to day through the small window in the studio, Tom keeps track of the time with the help of a laminated Morning Edition schedule featuring color-coded segments telling him when he’s on the air and when it is the NPR hosts’ turn. He monitors the newswire in between updates on the air, making sure he is not missing any major stories and keeping the weather reports up-to-date.

The schedule recently changed and now provides for more on-air time for the local hosts, meaning Tom needs to prepare more material each morning. Getting here at 3:30 in the morning and working for the next 90 minutes until he goes on air at 5 usually gives him enough time to prepare his whole show, and then he can breathe a little easier during Morning Edition.

Tom does not have any tricks for getting up each morning; rather, he proves true the old adage, “Early to bed, early to rise.” He usually goes to bed when the sun sets – at least in the winter – around 5:30 or 6, after watching the evening news. Summer makes it a little more difficult to fall asleep that early because the sun sets much later.

Even with the early start, however, Tom’s day is not finished at 9 when Morning Edition ends. Afterwards, he updates KPR’s website with material used during the show, records weather breaks and a noon newscast for KPR2, the radio station’s news and talk HD station.

With everything he needs to do, Tom usually does not get done until noon or 1 p.m. Once home, he tries to resist the urge to take a long nap because that makes it harder to go to bed. Despite the odd hours, Tom enjoys his job and the public radio lifestyle. He says his wife has always been very supportive of the unusual hours he keeps.

“I really do believe in the mission of public radio,” Tom says. “That’s why I’ve always worked in public radio. We can do a lot of things that commercial stations either can’t or won’t do. It’s programming that you really won’t hear anywhere else.”