Large wind farms have been producing electricity in Kansas for 20 years. In part two of a series on the state’s wind industry, Brian Grimmett of the Kansas News Service looks at how it has changed and where it could be heading.

MINNEOLA, Kan. — The wind farm business in Kansas has hit its awkward adolescence. It’s still growing 20 years in, but unsure what the near future might hold. If it wants to get through those tough years and continue to grow, it needs to find more workers, to figure out what to do with the dated-but-not-obsolete turbines erected two decades ago and to sort out a way to carry all that wind-harvesting muscle beyond the state's borders.

Consider the burly, newest version of wind farming at the Cimarron Bend wind farm south of Dodge City. “We just watch and listen to the towers,” said project supervisor Dewain Pfaff, who’s responsible for keeping about 300 turbines up and running. “If you can hear a noise we want to mitigate those issues as soon as possible.”

Standing at the base of one of the newest turbines on the site, he’s dwarfed by the tower that rises 300 feet into the air. That’s almost as tall as the Kansas State Capitol. Add in the blade when pointing straight up and it’s taller than the tallest building in the state. That mammoth size is one way wind turbines have changed over the past 20 years. While the turbine is nearly 300 feet tall, the turbines at the very first large-scale wind farm in the state stretched only 200 feet above the ground.

Transporting larger towers and blades is trickier, but inevitable. 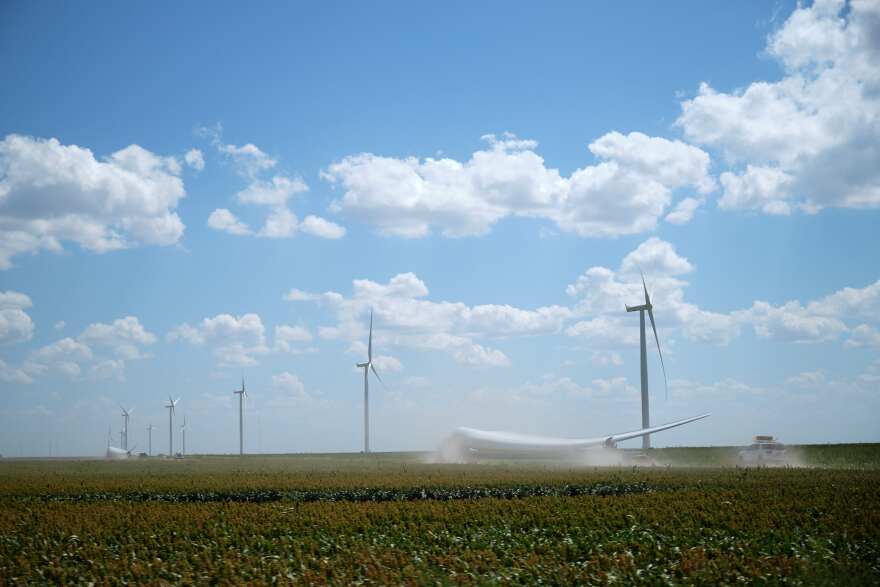 Wind turbines are relatively simple devices with only a few moving parts. But like all machines, they still require maintenance and repairs. About 35 people are on site daily at the Cimarron Bend projects. Stand close to one of the turbines and the woosh of the blades traveling as fast as 150 mph at the tip is quite loud. Walk a half-mile away and you can barely hear one. Inside the giant structures, once the turbines are shut down, technicians can grease bearings, patch blades and inspect for other mechanical or electrical faults.

Last year, almost 450 new wind turbines were erected in Kansas. Nearly as many will go up this year. “It’s not just that the industry needs to hire a lot of new technicians,” said Kit Thompson, chair of the renewable energy program at Cloud County Community College, “they’re offering very, very good pay.” The Bureau of Labor Statistics says the median pay for a wind tech in 2020 was $56,000 a year. Wind technician is also expected to be one of the fastest-growing jobs over the next 10 years.

Part of thinking about the future of the industry is figuring out what to do when turbines start to age. Turbines are typically built to last 20 to 25 years, but that lifespan can be extended by decades through changing out parts and replacing blades. The energy company ENEL recently went through the process, known as repowering, at its wind farm in Ellsworth County. ENEL’s head of sustainability, Marcus Krembs said about 85% of wind turbine components are fully recyclable. The giant blades, however, are not. Krembs said the company has committed to make sure old blades don’t end up in landfills. “We’re using a handful of blades from (that project) and partnering with an academic consortium to utilize those blades as transmission poles,” he said.

Wind turbine and blade manufacturers are also working on ways to make the blades easier and cheaper to recycle. Siemens Gamesa just launched what it’s calling the world’s first fully recyclable blade. It will be used on turbines being built off the shore of Germany. But there’s another major obstacle to continued growth in the wind industry. “There’s one word and it’s transmission,” Krembs said.

Transmission cables are the large wires used to transport high-voltage electricity from places where energy is produced, like Kansas, to the population centers to the east and west where it’s needed. 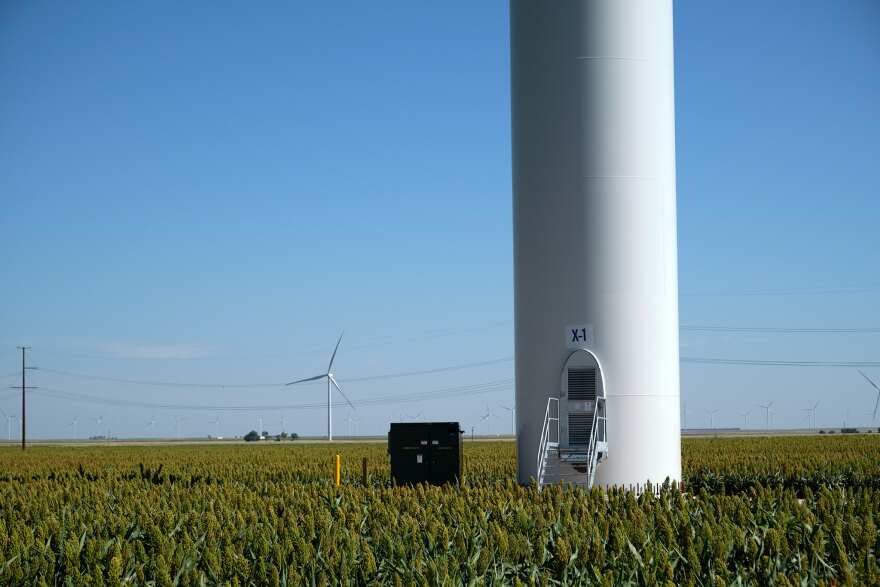 Alan Anderson is an attorney who helps represent renewable energy projects, including the proposed 800-mile-long multi-state transmission project known as the Grain Belt Express. “Similar to corn, beans and wheat, where we export,” he said, “it would be great if we could get the same with our renewable resources, that we can harvest it and get it to the marketplace to the benefit of Kansans.” The Grain Belt Express has been in the works for more than a decade while it’s sought government approval. When completed, Anderson said, it will be key to unlocking more of Kansas’ renewable potential by expanding the potential list of buyers for the state’s wind energy.

Even with more transmission, he said wind energy growth in Kansas will eventually slow. Especially as solar and battery storage becomes more affordable. But he said as long as the wind still blows in Kansas, there will be plenty of opportunities left to take advantage of one of the state’s most desired natural resources.

Part 1 of this story is available here.