A lab in Lenexa was among the first in the country to get an OK from regulators for an easy-to-use COVID-19 saliva test. As Celia Llopis-Jepsen of the Kansas News Service reports, getting there took long nights, help from robots, and a steady supply of chocolate chip cookies.

LENEXA, Kansas — For months, the people at a Johnson County lab found themselves consumed, running an endless parade of tests on human spit.

The feds hadn’t yet OK’d a single saliva test for COVID-19, but the scientists at Clinical Reference Laboratory were sure they could design something that worked.

If they could, they’d have a test that would let people give samples at home. It would skip the need for deep nasal swabs that were in short supply and freaked many people out. And it would spare the surgical gloves, gowns and masks needed elsewhere in a world knocked sideways by the pandemic.

But getting to that point meant routinely working 12- and 15-hour days.

Heather Fehling, one of the lead scientists at CRL, would huddle over lab equipment past midnight.

On a good night, she’d leave a few hours earlier, grab dinner at home, peek in on her sleeping 4-year-old and keep reading the lab instruments remotely. Even when she was taking a bath, she’d pore over research papers.

“I basically ate, slept and dreamt about COVID,” she said.

Ultimately, at the end of July, CRL’s work would pay off. The lab would hit the ground running — testing tens of thousands of Kansas and Missouri college students just in time for the new semester and inking a deal to help Los Angeles Unified School District test theirs.

That success came only after clearing one scientific or regulatory hurdle after another.

The lab made a financial gamble that meant buying up expensive, hard-to-get robots and tens of thousands of saliva-collection kits. It wagered that time and expense without knowing whether the U.S. Food and Drug Administration would finally sign off and make the investment pay off financially.

It receives a constant stream of packages by FedEx and courier containing tubes of saliva from nearby nursing homes and colleges, but also from the far-away sets of TV shows like “Dancing With The Stars.”

Out front, cars pull up to a dropbox labeled “Chief’s Kingdom.” Anyone who plans to sit in a suite at Arrowhead Stadium must turn in their spit within a few days of each game. The tests cost $139 on CRL’s website, but institutions that buy in bulk pay less.

“It’s crazy,” CRL worker Stephen Wheeler said while scanning in the barcodes on freshly unpacked saliva tubes so the lab can track each person’s spit through the testing process. “We get so many samples coming in.”

Morning, noon and night, workers buzz around the building in lab coats, masks and gloves, knowing each tube could carry the coronavirus that has killed 220,000 people nationwide.

“We look at it as: Everybody is contaminated,” Wheeler said.

No one has given CRL more of their own saliva than Bruce Dahlquist.

Dahlquist works on the business side at CRL. He contracted the disease in March, and that helped the lab tackle its testing challenge. It desperately needed a steady supply of viral samples to study. He became a source.

He had just cut short a work trip that had sent him to Nevada, Utah and Ohio. The pandemic had begun shutting some coastal cities down.

Within days of getting home, the coughing and body aches began. A deep nasal swab at a local drive-thru clinic confirmed Dahlquist had COVID-19.

For the next month, every other day, he’d leave samples on his porch for Fehling to pick up. In return, her team would tell him what they were learning about his viral load, and she’d drop off a treat.

“My deal with her was she had to bring me chocolate chip cookies,” said Dahlquist, who’d lost his ability to taste and smell most food. “Except for chocolate! I could taste chocolate, which was great.” 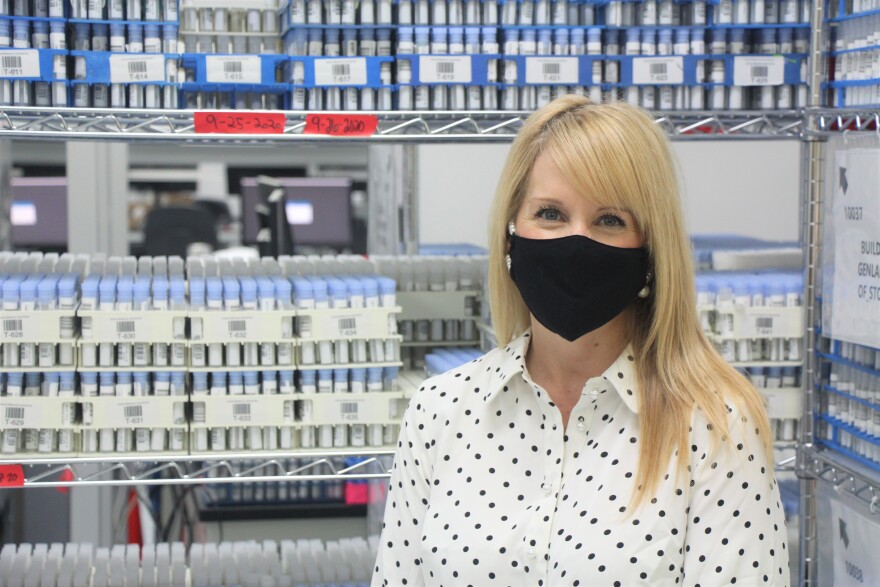 Back at the lab, CRL tested their sick coworker’s fluids — blood, urine and saliva — and soon found spit gave them consistent readings on the virus.

They tried his saliva in different preservatives, homed in on the best option. Then one day, Dahlquist filled two saliva tubes on the same day because the virus made it hard to think straight.

“The morning sample came back as positive for the virus, but the evening sample was negative,” Fehling recalled.

CRL repeated the exercise until it figured out people should avoid food, drinks and brushing their teeth before spitting into the tubes.

After about a month, Dahlquist got well. CRL still faced a long road of hurdles.

It needed emergency use authorization from the FDA.

Emergency authorization is the agency’s expedited green light process for COVID-19 tests. It’s less rigorous than full approval, to move fast amid the pandemic. Not all tests on the market undergo this FDA review — a matter of debate among experts — but the school districts and colleges lining up for CRL’s help insisted on buying a product that had.

Moreover, federal scrutiny was mandatory for part of CRL’s vision — distributing the kits for self-use. It wanted people to be able to give samples without medical supervision.

That would be critical to easing the rush on masks and gloves and would let people stay home. A person could spit into a tube, seal it, wash their hands and follow packing instructions. Then they’d use a smartphone app to register the tube’s barcode before sending it in.

But first, the FDA needed to see more of the science. CRL had to find lots more sick people whose spit it could test.

That proved tricky. Hospitals didn’t want the lab’s staff hanging around. Everyone was busy enough during a pandemic. Folks from the lab traveled far and wide to gather samples wherever they were welcomed.

“People were working at the plant shoulder-to-shoulder,” he said, “and then they’d go home and everybody in their family was getting it.”

To date, about 3,600 cases of the virus have been linked to about 20 outbreaks at Kansas slaughterhouses.

Health officials let him spend a day at a drive-up site where people came for nose swabs. Those who tested positive could provide spit for CRL to analyze, too.

The people at CRL ran experiment after experiment, compiling hundreds of pages of test results for the FDA.

Each time they thought they had finished what the FDA needed, the agency had more questions and sent emails and text messages even on evenings and weekends. For the folks at CRL, it all added up to another two and a half months of long days in the lab.

Meanwhile, summer had arrived and they raced to finish in time to help Kansas and Missouri colleges reopen their campuses in August.

Boxes of empty saliva tubes were already rolling in the door and the staff was training newly arrived robots to handle dozens, even hundreds, of spit samples at once. Automation would be critical to handling the daily volumes CRL hoped for. 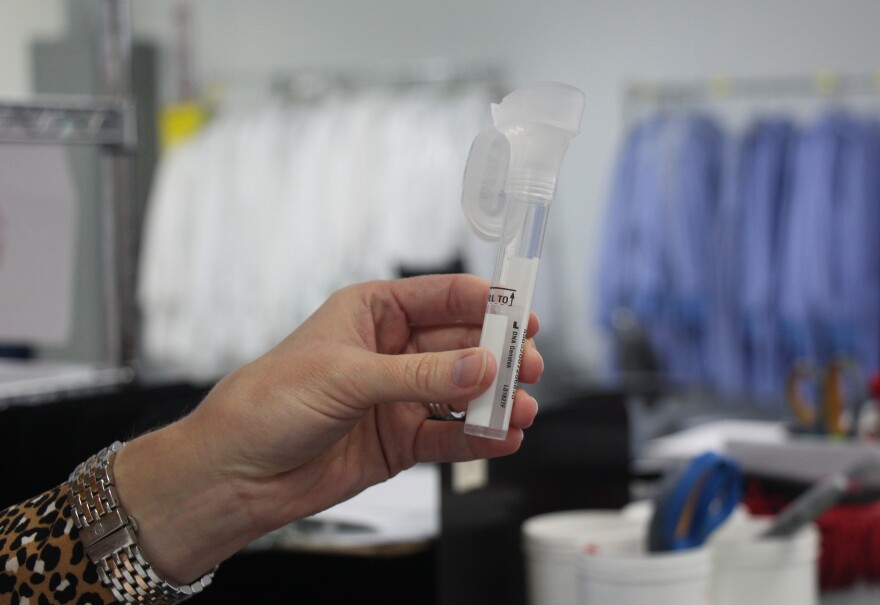 “I thought, ‘Oh goodness, what do they need now?’” she said. But this time the agency told her CRL had the green light. “It was just like pure elation.”

The lab threw an outdoor, socially distanced party. One of their coworkers DJ’ed. They celebrated to the tune of the Black Eyed Peas. “Fill up my cup! Mazel tov!”

“Just the weight lifted off our shoulders,” said Rebecca Henkhaus, who helped write the FDA application. “It was very exciting. I’ve never experienced anything like that in lab work.”

The samples roll in

It bought more robots and now has nearly 20, in big glass cases.

Some always work smoothly, others can be finicky and demanding. That’s earned them individual human names from the staff that spends days hovering over these machines.

“Norm” for one robot that just gets the job done. “Elon” (as in tech baron Musk) for another that’s decidedly more frustrating.

The lab workers guide and monitor the process as the machines use pipettes to wash and purify scores of saliva samples at once and extract genetic material — mixing in special compounds for the final, actual COVID-19 check on each sample.

The science behind these tests isn’t new. When the method — called PCR — was first developed, it sped up and revolutionized genetic work. It won the 1993 Nobel chemistry prize.

Now it lets scientists spot the virus behind COVID-19 in a matter of hours.

Drawing on that classic methodology to design and distribute a saliva kit amid a pandemic offers a whole new level of gratification for lab specialists used to working behind the scenes of medicine.

“I feel like I’ve been preparing my entire life for this pandemic,” said Valerie Stone, a senior lab manager at CRL. “I went into molecular (diagnostics) 16, 17 years ago knowing that eventually molecular was going to save the future, right? We’re finally seeing it come to fruition. … It’s amazing.”