The number of canceled flights skyrocketed, airlines hemorrhaged billions in losses and a lack of passengers turned once-bustling airports into ghost towns.

For rural airports like the one in Hays — not bustling, but critical in their own way — the shutdowns hurt that much more.

At the height of 2020’s stay-at-home orders, just 29 people flew out of Hays Regional Airport in the entire month of April. Time and again, airport director Jamie Salter said, some planes would take off with no passengers at all.

“There were some times they’d come and they’d have nobody on,” Salter said. “I hope that’s something we will never see again.”

The good news: Air travel is bouncing back.

Then there’s the bad news.

As demand for flights rises in response to falling COVID-19 case rates, airlines nationwide struggle to keep up with the jump in traffic. Now, Hays and more than two dozen other regional airports across the country face the danger of losing their only commercial airline, SkyWest.

The only thing preventing that is the federal government. Because the airline has accepted heavy tax subsidies for running flights through smaller airports, the company needs the U.S. Department of Transportation’s OK to pull out.

The situation is a local symptom of a broader challenge: a national pilot shortage caused by a wave of early retirements during the pandemic and a lack of new pilots with the training and certification to replace them.

“They truly don’t have the staff to do it,” Salter said. “Nobody, I don’t think, anticipated travel to come back in a roar like it did.”

The same way smaller towns face a challenge competing with big cities to recruit skilled workers, smaller airlines like SkyWest have to compete with big ones like Delta and Southwest for pilots. And because larger airlines flying more passengers to bigger cities can pay pilots more money, smaller airports like Hays often get left in the back of the line.

SkyWest filed paperwork with the federal government this spring giving a 90-day notice of its plan to end service at 29 of its 49 airports.

The state with the most towns facing this predicament is Kansas, where four of the state’s eight commercial airports — Hays, Liberal, Dodge City and Salina — now have to scramble to secure the future of their local flights. 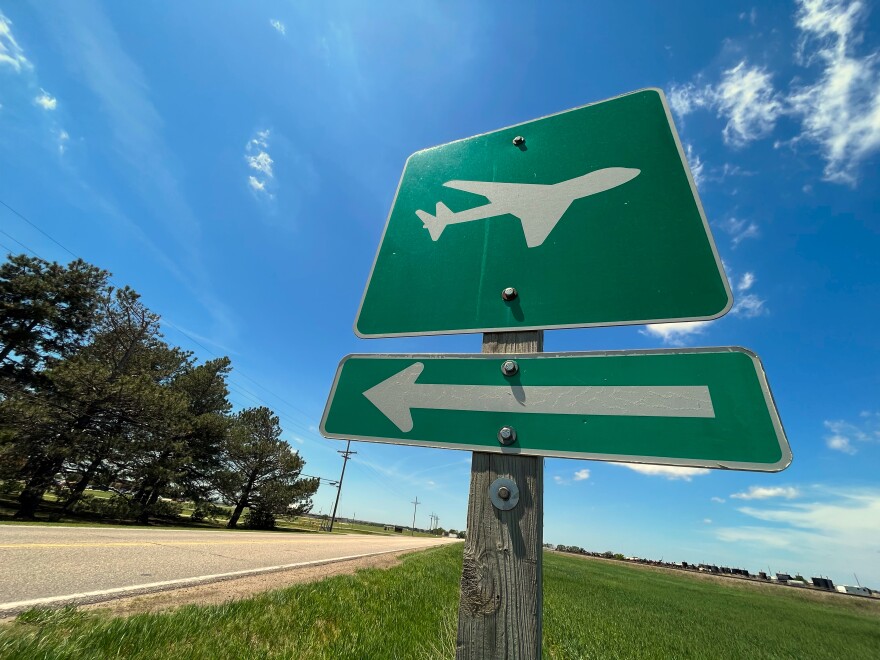 “Every other time, it seems like it would work itself out before any major disruption. And then this time, it seems to be a little bit more real,” Svaty said. “It’s been a tumultuous few months to say the least.”

Without local flights, Hays residents might have to drive 275 miles to Kansas City or 334 miles to Denver to board a plane. Those drives to big airports are even farther for people in Liberal.

“Because we’re so far from Denver (and) from Kansas City, we have to have some sort of travel that is more convenient than just getting on Highway 54 and driving,” Svaty said, “This really is our lifeline to the rest of the world.”

The uncertainty that has followed in the wake of SkyWest’s announcement has revealed the precarious nature of air travel in rural places like western Kansas, where airports offer just one or two flights on a good day.

But Svaty said it also illustrates just how vital having those one or two flights are for small towns’ survival.

“Not to say that you lose the airport, you lose the town,” Svaty said. “But it is critical that … we find something that can assure people that, ‘It’s OK to live out here in rural Kansas because we still have great air service.’”

While the total number of passengers flying out of rural airports like Hays and Liberal might not seem like much, having commercial air service still provides a big boost to local economies.

A 2017 study commissioned by the Kansas Department of Transportation says that Hays Regional Airport contributes an annual economic impact of nearly $18 million dollars. Liberal’s airport injects more than $38 million into the local economy.

So SkyWest’s announcement in March sent shockwaves through these communities.

Hays Chamber of Commerce director Sarah Wasinger said that air service is vital for a town like Hays to be able to recruit, attract and retain good talent for critical jobs like doctors, nurses and educators.

“Without Hays Regional Airport, there would be quite a few people who wouldn't even look at Hays as an option for employment,” Wasinger said, “just because they consider that a necessary quality of life item for them to relocate.”

Wasinger said dependable air travel matters to the town’s current businesses too, like retailers who have to fly out on seasonal buying trips.

But the pilot shortage has already caused some upheaval, even if SkyWest hasn’t officially left.

Many airlines, including SkyWest, have begun pairing regional airport routes together — Liberal and Dodge City, Hays and Salina. The plan allows the same pilots to serve multiple towns at the same time but cuts the number of direct flights for each town roughly in half.

Svaty said that there’s a big difference between boarding a 45-minute direct flight from Liberal to Denver and boarding a flight that stops in Dodge City on its way. And that change in flight schedules has already made his job of attracting new businesses and workers to Liberal that much more challenging.

For example, an agricultural company was scheduled to fly to Liberal from California to consider moving its operations to southwest Kansas. But after SkyWest’s announcement, the company scrapped its travel plans. They’re still on hold.

“I sold this place on the ability for them to be able to make it from California to here in two quick flights,” Svaty said. “Now all of a sudden … it’s going to be a totally different situation than what I had sold them on. And so from my perspective, that was just a gut shot.”

Here’s another example: During the pandemic, Liberal hosted a handful of tech workers from Seattle who wanted to see what it would be like to work remotely from southwest Kansas. Svaty had planned on making a push to attract more remote workers like that by marketing Liberal as a place where they could enjoy a low cost of living and more space, but still be able to get back to the West Coast in two easy flights.

Now those plans are in a holding pattern.

“We have plenty of great jobs, we just don't have the people,” Svaty said. “So when you lose those nuggets of quality of life, it makes it even more challenging to get them to move out here.”

Hurry up and wait

The long-term future for airports like Hays and Liberal is still uncertain.

Salter with the Hays airport hopes that the federal government, the airport and SkyWest might still find a solution that keeps SkyWest in Hays, even if it means having fewer flights per week.

That’s because, she said, SkyWest remains the best option available to serve a smaller airport like Hays through the federal Essential Air Service program — which subsidizes airlines’ flights to regional airports.

She said the dependability of Hays’ flights has greatly improved since SkyWest came on board here in 2014. And as soon as the airline announced it was trying to leave, she got a flood of concerned comments from the community urging her to try to keep the airline.

To that end, Salter and a delegation of other western Kansas community leaders met with Department of Transportation officials in Washington, D.C., earlier this month.

But she said that an airline trying to exit 29 airports at once is unprecedented, so government officials were likely as dumbfounded by SkyWest’s announcement as were people in Hays.

Federal transportation officials have “never seen anything like this before,” Salter said. “So it really is all of us trying to figure this out as we go.”

For now, the federal government is forcing SkyWest to continue some service to these airports until the towns get a replacement airline up and running. And she said that both SkyWest and the DOT have shown a willingness to be flexible.

But the odds of finding another airline to fill SkyWest’s place on the tarmac right now don’t look promising.

“Not to say that you lose the airport, you lose the town. But it is critical." - Eli Svaty, Seward County Development Corporation

Hays’ airport just held a 60-day application period to see if any other airlines are interested in coming to town. But it received just one proposal. That came from a boutique commuter air service company in California whose airplanes only have room for about 10 people.

Now that Hays’ passenger traffic has ticked back up toward what it was in pre-pandemic times, Salter said, those small planes wouldn’t cut it. SkyWest’s planes hold around 50 people.

“We don't have any intention of recommending to go with the bid that we received,” Salter said. “The capacity just doesn't meet our needs.”

So it appears increasingly likely that the federal government will continue to make SkyWest fly to these airports long after the airline’s proposed exit date, June 10.

If no suitable replacement airline steps forward, it’s possible SkyWest could be forced to continue some service to places like Hays until the end of its current contract in August of 2024.

“Everything is so up in the air right now as far as what that looks like in the future," Salter said. “Hurry up and wait, it seems is where we're at.”