Medicaid expansion and the proposed amendment on abortion will have to wait in Kansas for a least a few weeks. The new coronavirus has forced state lawmakers into an early spring break, but not before they scrambled to approve a budget … which includes millions to help Kansas respond to the pandemic. Stephen Koranda of the Kansas News Service reviews the hectic week in the Statehouse.

TOPEKA, Kansas — The week started with a Kansas House Democrat making an unusual request to not just his fellow lawmakers on both sides of the aisle, but to the Lord: “Please nudge our counterparts in the Senate. Please help them to work with a little more urgency.”

With the threat of the new coronavirus growing by the day — businesses were shutting down, universities moving fully online — legislators knew time was running out to pass the state’s budget for the next fiscal year. The action was pretty much restricted to the Statehouse’s document room and the chambers. No visitors or school groups in the halls of the Capitol, the hearing rooms empty, the whole place a reminder of how quickly things changed.

A week before, Kansas House leaders had sent the $19.9 billion budget straight from the Appropriations Committee to a joint committee of senators and representatives. The Senate’s version landed there Tuesday, the same day Gov. Laura Kelly shut down all K-12 schools until essentially August.

On Thursday, both chambers passed the final version, which included $65 million for COVID-19 response, but not without pushback from some Republican senators who thought it unwise to add spending amid a tumbling stock market.

“We don’t have fluff in this,” said Republican Sen. Carolyn McGinn, the chamber’s top budget writer. “More than anything, we took care of the social services that are going to be very much needed back in your home communities.”

The budget is headed to Kelly’s desk, her proposals largely intact, and the Kansas Statehouse will head out for an extended spring break. Statehouse leaders said they hope to return on April 27 for a veto session, during which they’d finish their work and try to settle two issues that consumed much of their attention until recently: Medicaid expansion and a proposed constitutional amendment on abortion.

Also before leaving Topeka, a majority of the House voted to kill two of Kelly’s efforts to change the makeup of some state agencies. One would have effectively reconstituted the Department of Social and Rehabilitation Services (as the  Department of Human Services), which was split apart in 2012.

The other would have established an independent office to draft a state energy plan. Currently, the state Energy Office is located at the Kansas Corporation Commission, the state agency that regulates utilities. It has only one part-time employee.

But the fear of COVID-19 spreading quickly through the state and the U.S. — and the concurrent feelings that state leaders were overreacting — pushed the session to an unusual moment in history. Lawmakers extended unemployment benefits to 26 weeks in response to business closures and extended judicial branch deadlines.

House Speaker Ron Ryckman said that the $65 million for coronavirus-related efforts ($15 million for the Division of Emergency Management and $50 million into a fund controlled by a panel of lawmakers) was key.

“We prioritized the things that we wanted to make sure that we could do,” he said, “and then give us flexibility going forward.”

But Kelly’s decision to close K-12 schools and limit gatherings to 50 people or fewer drew ire from some lawmakers.

But Democratic Sen. Mary Ware told senators that she had met with someone who, turned out, had been exposed to a now-confirmed coronavirus case, was showing symptoms and being tested.

“This is not something to take as theoretical, certainly not as a hoax,” she said. “This is real.”

Kelly’s actions under the state of emergency declaration, good through March 27, were met with particular scorn on the Senate floor. Some senators didn’t want her to be able to seize private property, ban the sales of guns and ammunition or force people or livestock to be relocated, which are all powers provided in state law.

“We’ve got to accept responsibility ourselves,” said Republican Sen. Caryn Tyson. “We can’t rely on the government to tell us every little move to make.”

The House wanted to extend her order until January 2021. The Senate wanted to strip some of the powers and only have the declaration last through May 1.

Their compromise: Kelly will keep the powers, but legislative leaders will review her actions and choose whether to extend or revoke the declaration every 30 days after May 1.

And there was a moment of silence Tuesday for Senate President Susan Wagle’s daughter, who died at the age of 38 from cancer. Wagle was not in the Statehouse after that.

Where the money goes

Democratic Rep. Jim Ward said fast-tracking the budget meant most lawmakers had little input on the budget. He urged the chamber to leave enough time to really dig into spending issues at the end of the session.

“We’ve got over 50 items and almost three-quarters of a billion dollars to talk about,” Ward said, “and I think the world is going to look a lot different in a month.”

But there were some notable additions of money for agencies.

On the health care front, the budget adds $2 million more for community mental health centers and $3 million for senior care services that help older Kansans stay in their homes. With coronavirus spreading in long-term care facilities in Washington and Florida, the money could help seniors potentially avoid getting a virus that is deadly for older people.

But some issues were pushed off for later, as Ward mentioned, like 2.5% raises for state employees as well as bigger raises for judicial branch employees.

A new plan for the state’s roads

Before tackling the budget Thursday, the House and Senate approved a $10 billion, 10-year plan for the state’s transportation system. It’s based on what Kelly proposed, and unlike previous transportation plans, it mainly focuses on maintenance instead of new projects.

About half of its funding would go to repairing highways and bridges. Each of Kansas’ 105 counties will see $8 million over the next 10 years. The plans also allocates millions for broadband expansion and fixing railways.

“I think it’s very important to the future of Kansas, and it’s nice that we have a little bit of good news today in the face of everything else we’re facing,” Wolfe Moore said.

If signed by the governor, the measure goes into effect on July 1.

New agencies off the table

Kelly had wanted to combine the troubled Department for Children and Families (foster care, federal food aid and other welfare programs) with the Department for Aging and Disability Services (mental health and programs for elderly and disabled). Her proposal also would have wrapped in juvenile justice services that are currently overseen by the Department of Corrections.

But once the idea reached the House floor on Wednesday, Democrats accused Republicans of rejecting the changes for strictly political reasons.

Reacting to arguments against the creation of an independent energy office, Democratic Rep. John Carmichael of Wichita said, “This is pure, blatant partisanship.”

“It’s the party of “no” sitting over here,” Carmichael added, gesturing to the side of the chamber occupied by Republicans.

But Republicans insisted their opposition stemmed from the lack of detail in the governor’s proposals, not politics.

While “disappointed,” Kelly said Wednesday that the increased demand for government services triggered by the coronavirus outbreak would have made it difficult to set up a new state agency.

“It may be in some ways a blessing,” Kelly said.

Even so, Kelly maintains that consolidating social service programs under one roof would streamline the delivery of services and “make it easier for Kansans” to navigate the bureaucracy.

“It is something I want to happen but we’re willing to bring that back to the Legislature next year,” she said.

Just a few weeks ago, lawmakers had hit the midpoint of the session, sending the other chamber bills they thought should reach Kelly’s pen, things like sports gambling, a public voice in property taxes and making it easier to get a suspended driver’s license back.

What they were absolutely deadlocked on, and what may return to the forefront if the session is able to resume, were two things: Expanding KanCare to an estimated 130,000 low-income Kansans, and a proposed amendment to strip what the Supreme Court said was the right to an abortion out of the state constitution.

Despite a Republican Senate leader joining with Kelly in calling for a Medicaid compromise, some Republican leaders oppose it. And when the House narrowly rejected a decision to put the proposed abortion amendment on the August primary ballot, both efforts ground to a halt.

Republican Speaker Pro Tem Blaine Finch thanked his fellow House members Thursday for working to put aside differences to craft solutions in the face of the coronavirus, and urged them to keep the spirit of bipartisan compromise alive.

“Our fellow Kansans are facing hardships, and from everything we’re told, those hardships will increase in the coming weeks,” Finch said. “We’re going to get through this as we have time and time and time again in this state — together.”

Kelly will have to approve the newly passed budget, which would start July 1. She got pretty much what she wanted, with some exceptions. But this isn’t the final word on the budgeting, because state lawmakers will make final adjustments after getting updated tax collections numbers.

Here’s a breakdown of the major agencies’ funding. The first number is this fiscal year’s expenditures. The second number is the amount for fiscal year 2021 (all FY21 figures are approximations based on the Governor’s Budget Report and adjustments made by the Legislature). 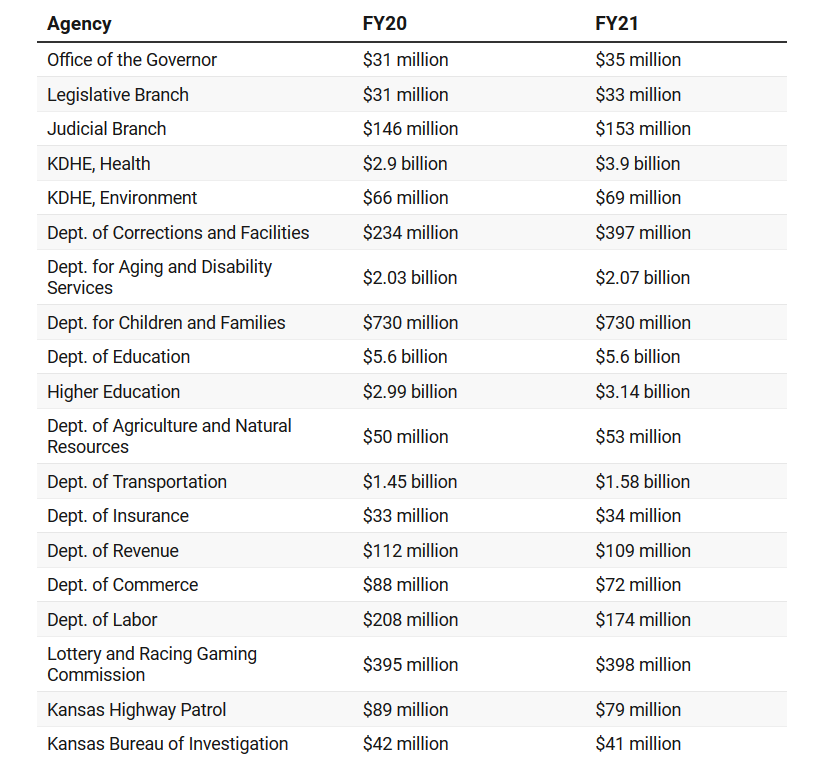 Stephen Koranda is the Statehouse reporter for Kansas Public Radio and the Kansas News Service. You can reach him on Twitter @kprkoranda.

Jim McLean is the senior correspondent for the Kansas News Service. You can reach him on Twitter @jmcleanks.

Daniel Caudill covers the Statehouse. You can reach him on Twitter @byDanielCaudill.

The Kansas News Service is a collaboration of Kansas Public Radio, KCUR, KMUW and High Plains Public Radio focused on health, the social determinants of health and their connection to public policy.