PARADISE, Kansas — This time of year, rancher Rich Koester is normally busy caring for newborn calves or feeding his herd to get them ready for winter.

As he walked up to the edge of a freshly dug pit roughly the size of a backyard swimming pool, the charred stubble of prairie grass crunched beneath his feet.

Days after the wildfire that torched his pasture went out, the smell of smoke still hung in the air.

“It was burning so fast that it just went over the top of everything. … A lot of the cattle didn’t have a chance,” he said, fighting back tears. “I don’t know how any of mine survived.” 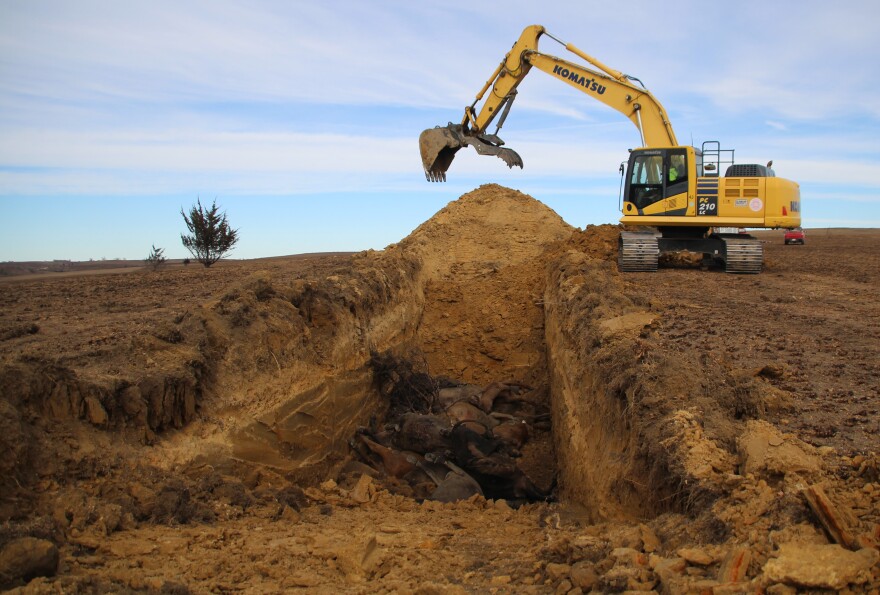 To his right, a construction excavator just finished lowering one more dead cow onto a pile of about 20 carcasses in this mass grave.

Koester said the fire killed more than a third of his 200-head herd and engulfed every bit of his roughly 800-acre pasture.

The unrelenting wind storm that tore across Kansas on Dec. 15 sparked widespread, devastating wildfires fueled by dry grass and up to 100 mph gusts. For ranchers like Koester, the days and nights since the storm have been long and filled with difficult choices. And this is just the start of a much longer road to recovery.

The land Koester has ranched in Russell County for three decades sat squarely in the path of a fire that tore through well over 100,000 acres following the storm.

Still, he considers himself luckier than most around here. The fire only burned his land and cattle. He said some of his neighbors lost a lot more — homes, barns, vehicles.

“So you can see how much it’s affected a lot of people, not just me,” he said. “I’m just a little drop in the bucket.” 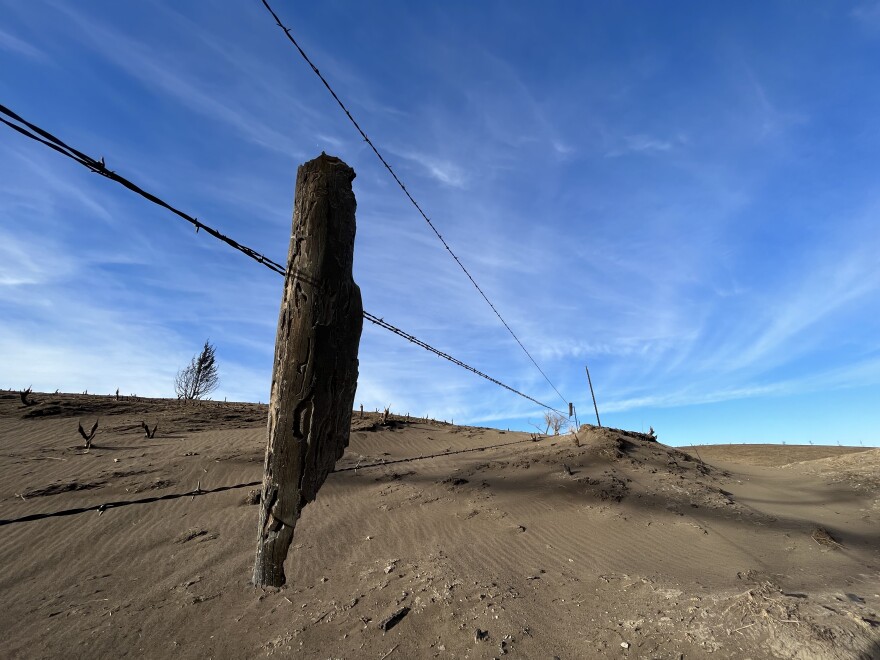 Along the dirt roads near Koester’s ranch, other fields and rolling grassland hills have been charred black. Some that aren’t black are tan — the color of the wind-blown soot now covering them in rippled dunes that resemble a desert.

The blaze that covered this area has been dubbed the Four County Fire because it burned parts of Russell, Ellis, Osborne and Rooks Counties.

This Four County Fire alone incinerated more than 190 square miles. That’s an area larger than all of Wyandotte County (156 square miles) or the city of Wichita (166.5 square miles). 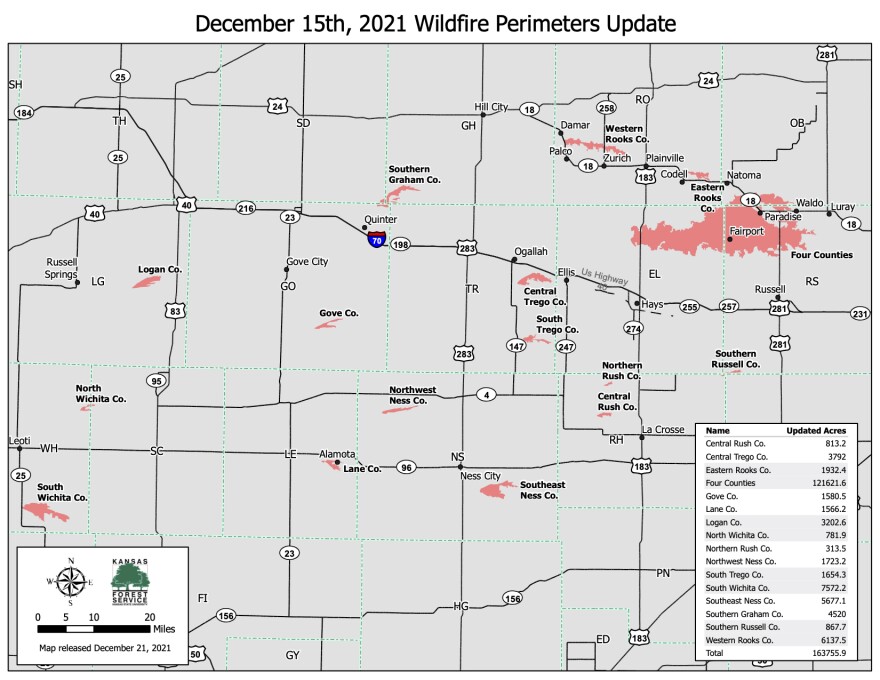 But it wasn’t the only wildfire that the wind storm sparked. In all, the Kansas Forest Service recorded 16 wildfires in western and central Kansas that day, singeing more than 160,000 acres across 13 counties.

“That storm was such a widespread storm that every county had something going on,” she said. “Or if they didn't, the storm was still on its way.”

And the extreme wind made it too dangerous for state firefighters and water-toting aircraft to arrive on the scene until the next day. 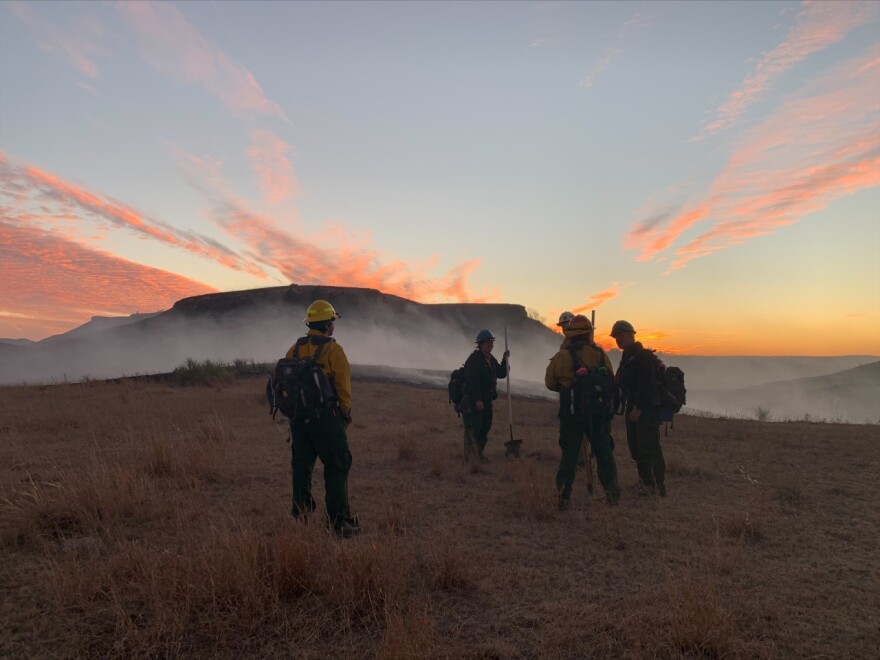 Hartman said the state’s usual wildfire season hits in the spring. But the abnormally dry conditions in western and central Kansas this fall — Kansas State University’s research center in Hays has recorded no rainfall in the area since November 3rd — left the region ripe for an earlier fire of this magnitude.

“It was definitely a perfect storm,” she said. “These fires ran for 20-plus miles in an afternoon. … It's very, very reminiscent of what you would see in California.”

The Kansas Forest Service knows all too well what those California fires look and feel like.

Its fire suppression team is often dispatched to fight wildfires all over the country. And its experience in the West prepared it for the fast-moving fires in Kansas.

But Hartman said that seeing these types of fires so close to home hit firefighters in a way those far-off fires did not.

“When it's at home, when it's your neighbors and your friends and your family,” she said, “it hits really hard emotionally on everybody.” 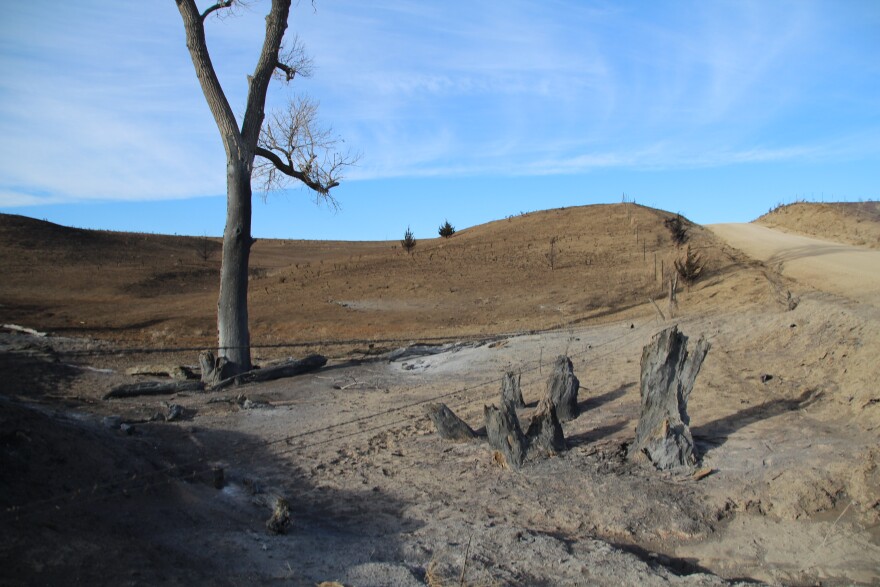 Even in the face of such widespread destruction, communities all over western and central Kansas quickly sprang into action to help those who were in the fire’s path.

The 4-H building in Russell was set up to collect donations, everything from barbed wire and hay bales to winter clothing and phone chargers. GoFundMe pages for Kansans who lost their farms, ranches and homes drew tens of thousands of dollars in donations from across the country.

In the days following the fire at Koester’s ranch, he said people showed up with horses and four-wheelers to help round up his remaining live cattle, many of which escaped to neighboring land after the fences burned. Trucks arrived with hay to feed them because their grazing grass went up in smoke.

On the day Koester buried some of his cattle, volunteers brought in Jeeps and ATVs from two counties away to help him gather carcasses from across his land. 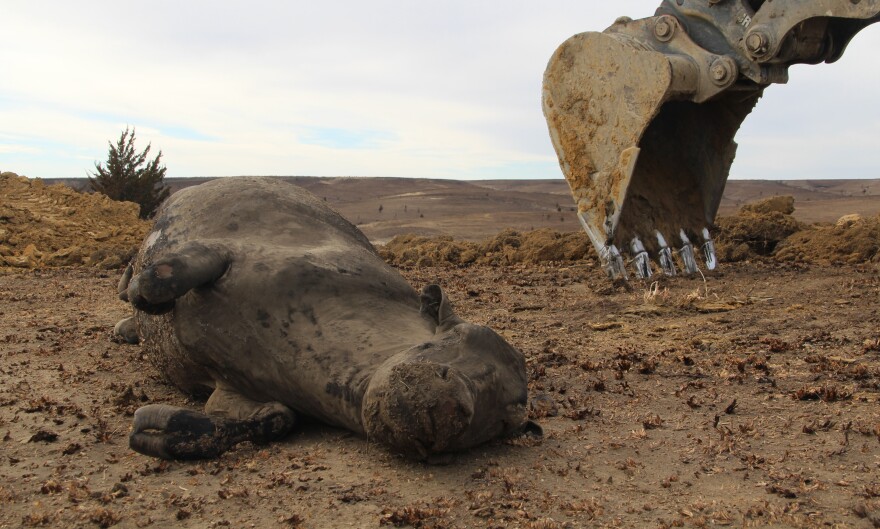 Matt McCune, a farmer and sales agronomist in Rooks County, said similar community initiatives have been popping up across the region. He has been one of the many people helping to organize local recovery efforts on social media and get supplies distributed to people who need them.

He said ranchers in the area have collectively seen thousands of cattle die the same way Koester’s did. Many people lost everything they had — homes, trucks, tractors, sheds — so it can be difficult for them to even know where to start.

“Most people haven't wrapped their heads around what they need,” McCune said. “(Ranching is) all they put their heart and soul into, and a lot of these guys were completely wiped out and have nothing left.”

He said most ranchers’ immediate needs include getting financial help to pay insurance deductibles and getting the materials and labor they need to rebuild their fences. But with so much demand for fence posts and wire in such a remote area, he said it’s nearly impossible to find the supplies to get started.

And the long-term recovery — rebuilding their businesses and herds — hasn’t even begun. So he’s concerned this region’s critical needs will fall off the national radar long before they’re met.

“Usually, a couple weeks from now, these events drop off of people's minds,” he said. “But this could take forever to get this stuff back built back up. … We’re probably talking two, three years.” 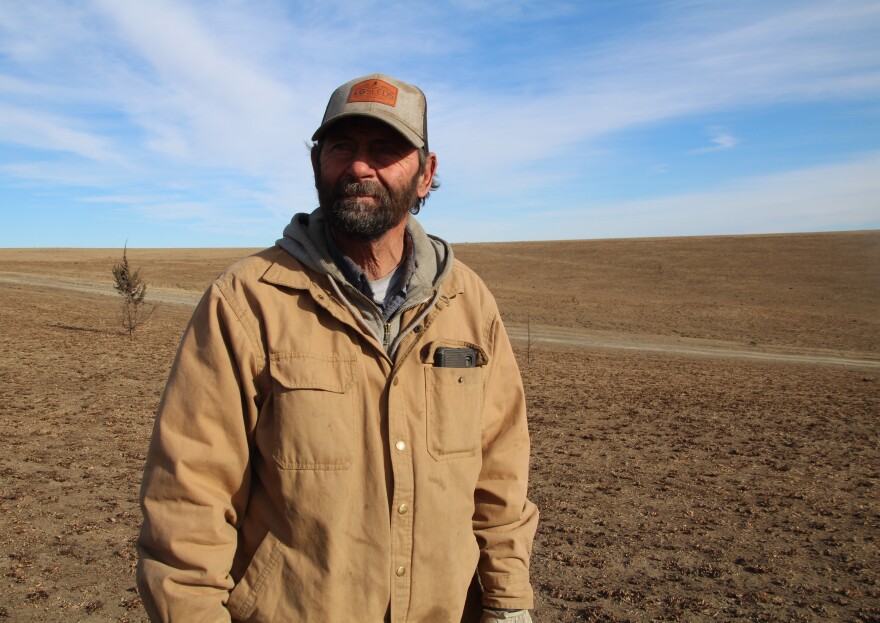 As the sun dipped down at his pasture in Russell County, Rich Koester watched a bulldozer push the last pile of soil onto his cattle's burial site. It immediately blends in with the dust-covered ground that surrounds it.

He paused for a moment to look down at the patch of dirt that now covers many of the animals he’s cared for since they were born. Then, he climbed onto his four-wheeler with his dog, Gibbs, and got back to work.

“We pick up everything in pieces,” he said, “and try to put everything back together that we can and go on.”

His biggest concern in the coming days will be deciding which of his remaining cattle need medicine for their burns and which ones should be put down.

But first, he stopped to check in on his neighbor, who also lost his pasture to the fire, to ask if there was anything he could do to lend him a hand.

“You help them, they'll help you, and you just pass it on,” Koester said. “That’s the way it is out here.” 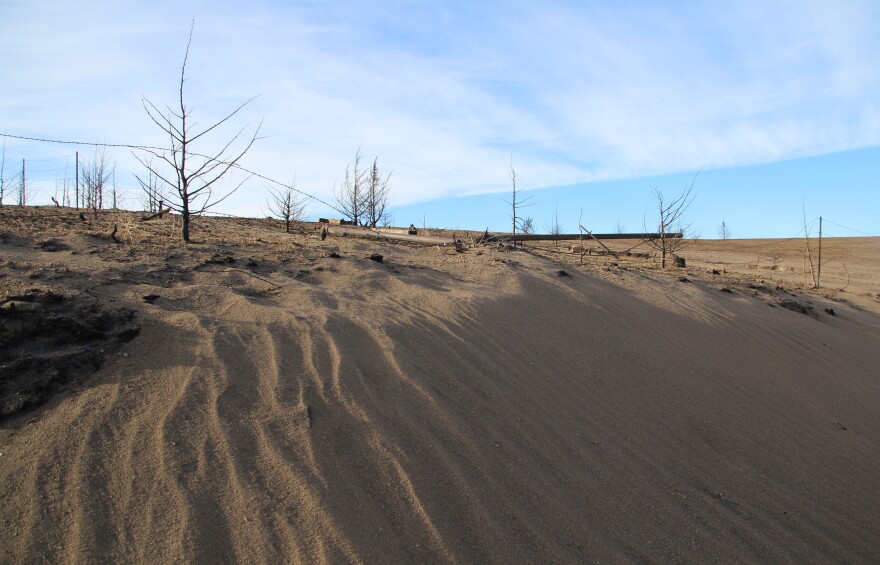 If you've been affected by Kansas wildfires or if you're looking for ways to help those who were affected, the Kansas Department of Agriculture has set up a recovery resources hub.