The wall in front of him used to make up the plain, gray side of a local glass shop. Now, it’s his giant concrete canvas — 13 feet tall by more than 18 feet wide — for painting one of the northwest Kansas town’s new murals.

It’s so large that he has to take a step back every once in a while just to get a good look at his progress.

“I still need to make that brightest highlight a little brighter, but it’s close,” he said. “I could probably about bust into dancing right now.”

From Hays to Great Bend to Lecompton, small towns across the state increasingly turn to larger-than-life works of art to inspire pride among residents and attract tourists. And as more towns blaze this artistic trail, the economic benefits of murals — and the roadmap to getting them done — come into focus. Miller, an artist who has lived and worked in Hays for the past 10 years, is putting the finishing touches on a painting that depicts Indigenous bison dancers from tribes who once used the western Kansas plains as hunting grounds.

Translating his art to such a grand scale has been a months-long process that’s come with plenty of challenges, many of them conquered while standing on a scaffold five feet above the sidewalk.

There’s the math it takes to accurately enlarge his original four-foot by two-foot painting to fill this wall. Then there are the long days of taxing physical work to actually brush the paint onto a building instead of a canvas.

“It's just kind of a different animal,” he said, “a different process.”

But around Hays, this type of scene is becoming increasingly common.

Miller’s wall is the second in a line of several murals that will go up on local buildings, from the thrift shop to the sushi restaurant, over the next year.

Branded as Brush the Bricks, the series will culminate with a community art project that invites residents to paint part of Hays’ grain co-op. And the town has already collected roughly half of the donations and grants it’ll need to reach its $150,000 goal to pay for the endeavor.

Miller said that’s not just good news for local artists, but also for anyone else who calls western Kansas home.

“It gives you a sense of place,” Miller said, “and it's another way to bring people together.” 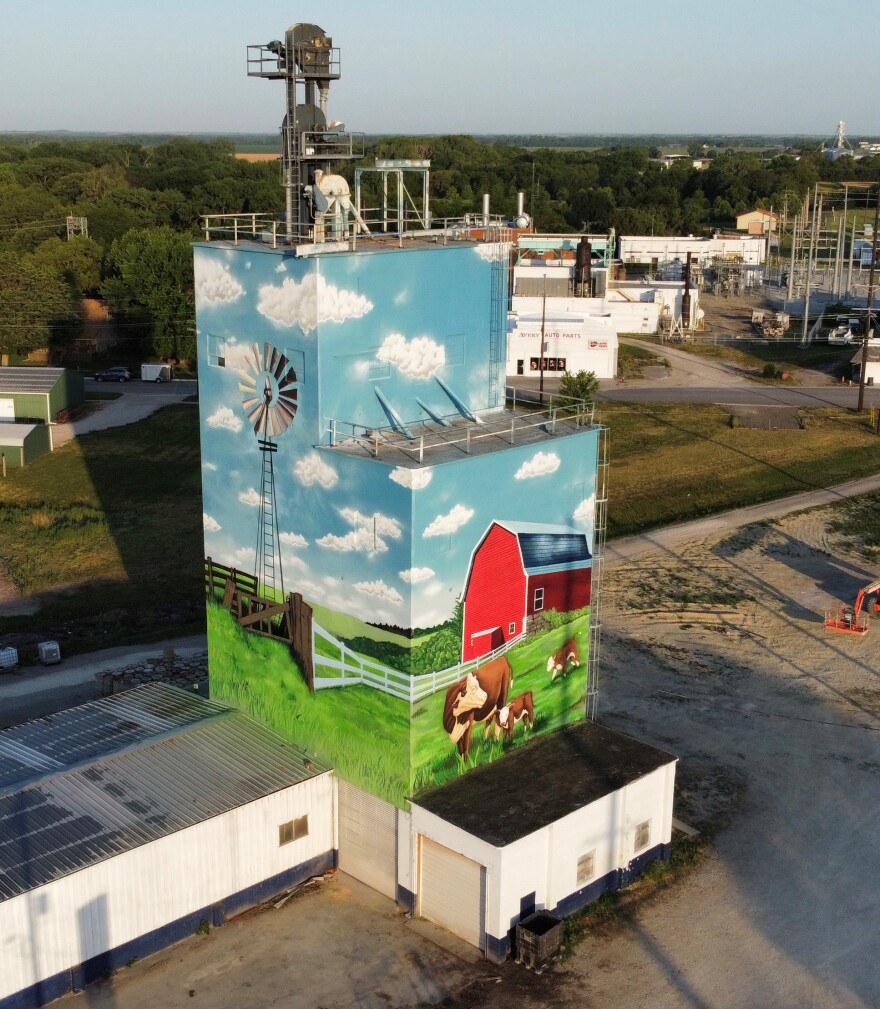 Murals in rural Kansas go back at least 100 years, to companies like Coca-Cola commissioning artists to hand-paint advertisements on brick walls.

But Marci Penner, executive director of the Kansas Sampler Foundation, said the idea of outdoor art as a means for boosting a small town’s bottom line and staving off population loss has now become, well, trendy.

“The trend to utilize (murals) as an economic development tool … to bring people in, to improve quality of life,” she said, “that’s on the rise.”

And Penner credits Clay Center, a north-central Kansas town with just under 4,000 residents, as the place that launched a thousand paintbrushes.

When her foundation put together a recent workshop in Clay Center to teach other Kansas towns how to start putting up their own murals, Penner ended up welcoming attendees from 30 different places across the state — from Burlington in southeast Kansas to Meade and Norton in western Kansas.

Shannon Stark, chamber of commerce director for Clay Center, and other local leaders compiled a handbook for towns that want to follow in their footsteps. And they fielded logistical questions from the visiting towns like what their murals cost per square foot, where they found the artists and how they raised the money to pay for everything.

As someone who grew up in Clay Center, Stark is glad to see more small towns willing to take these kinds of risks in the name of preserving their futures.

“Quality of life, art, travel and tourism, marketing your community,” she said, ”all of those things really go back to economic development.”

And more and more towns are beginning to think that way. 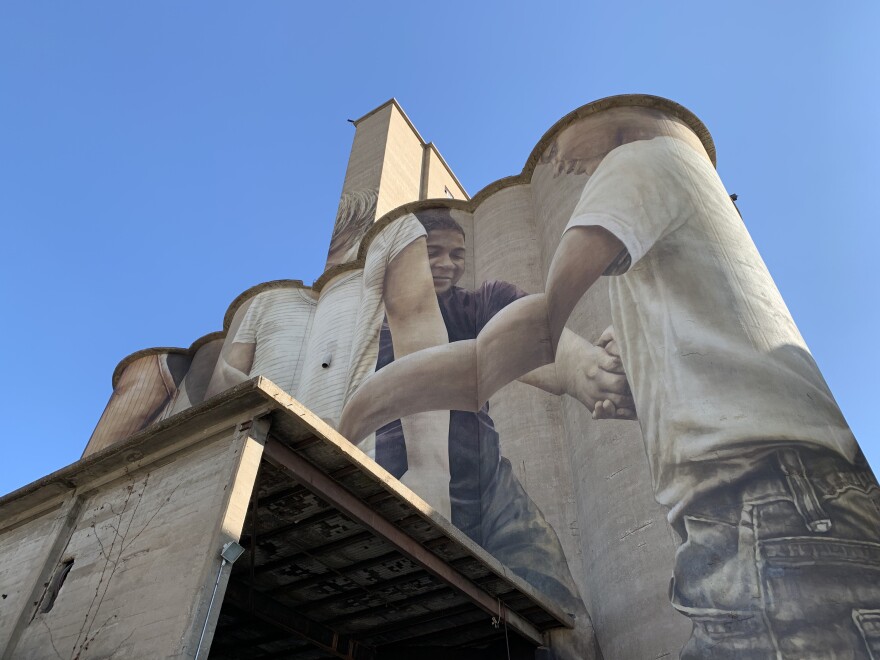 The Salina Kanvas Project recently raised $250,000 to bring artist Guido Van Helten all the way from Australia to cover one of the town’s grain elevators with hyper-realistic depictions of local children.

Leavenworth put up a new mural this summer illustrating the town’s history. Hutchinson unveiled a wall of sunflowers and meadowlarks at last month’s Kansas state fair.

Clay Center’s mural movement is still relatively new, with its first artwork going up last fall. And Stark said some people in town resisted the idea of investing in murals at first.

But as Clay Center began to attract visitors who came specifically for a glimpse of its paintings, it didn’t take long to get the community on board.

“Once we got like three murals done,” she said, “businesses and building owners … would come to us and say, ‘What do I have to do to get a mural on my wall?’” 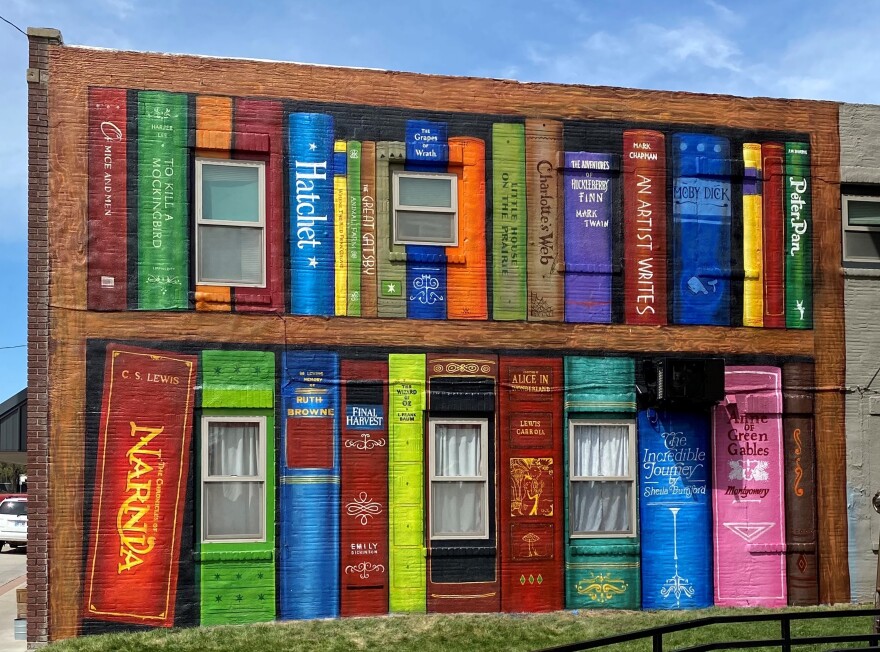 Clay Center has put up 15 murals so far, most of them privately funded with money that the town’s mural committee has drummed up from donors and local businesses. Each piece typically costs at least $5,000 to create.

There’s a painting of rescue dogs on the side of the animal shelter and a giant bookshelf next to the library. The largest mural, a farm scene, covers a grain elevator more than 80 feet tall.

And the town has plans for at least three more.

Stark said Clay Center’s businesses are already reaping the financial benefits, with more new customers coming from out of town and spending their money locally as they walk, bike or drive around town to see the artwork.

“If you have strong economics in your community,” she said, “you’re going to have a strong community.” 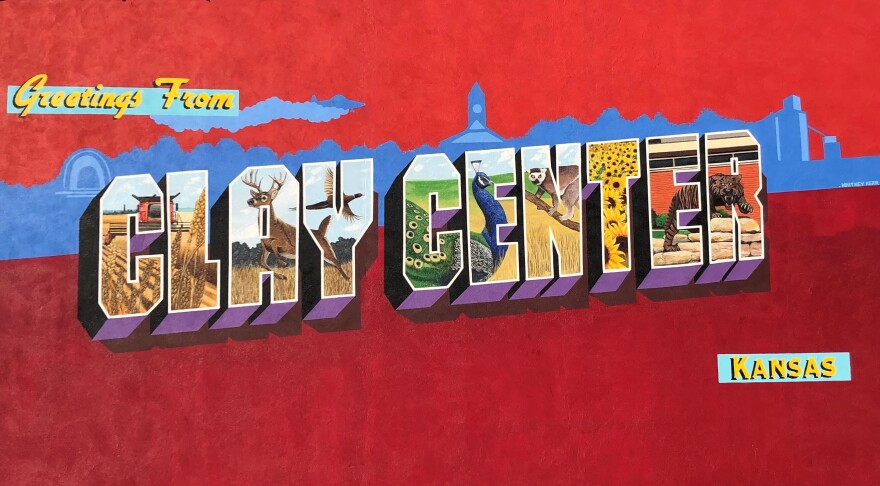 As early adopters like Clay Center see success, Penner of the Kansas Sampler Foundation isn’t surprised to see more towns clamoring to get into the mural game.

“There’s a win-win-win,” she said. “It's a community win, it's an artist win and I think it's a win for the public as well.”

And while rural Kansas towns might not be able to control the other economic and demographic factors shaping their futures, putting up a mural is one positive thing that’s within the town’s power to change.

“You maybe can’t bring in this big manufacturing plant,” she said, “but you can start to chip away at changing the look of your town and the feel of your town.”

Penner said that when small towns think big with these art projects, it can also change the way that both people who live there and people who visit view rural Kansas.

And even if a small town’s mural doesn’t bring in one cent of tourism income, the worst-case scenario is that residents get to enjoy some new art and a renewed sense of pride about where they live.

“Rural communities aren’t always thought of as fun and colorful,” she said. “There’s closed businesses, maybe it's looking a little dreary. … A well-placed mural can maybe be that trigger to start turning things around.”