The Topeka Symphony Orchestra had big plans for its 75th anniversary season. But with the coronavirus, that’s all out the window now. But the orchestra is still determined to play, so the musicians are adapting, wearing face-masks and using lots of hand sanitizer. Julie Denesha, from affiliate station KCUR, visited a rehearsal as the orchestra prepares for its next performance on November 14.

Musicians, with instruments in tow, stream into the Topeka Performing Arts Center on a Sunday evening. They're pumped for their first rehearsal since February. But right away some difficulties present themselves.


The first is the positioning of the musicians' seats on the stage — six feet apart.

“It's a totally new challenge, especially in the strings, because they're used to sitting right next to each other so they can see each other out of the corner of their eye and hear each other,” says Kyle Wiley Pickett, the orchestra's conductor and music director.

Then, of course, there's the mask issue.

“Well, walking into the hall tonight, I wish that I had prepared by practicing with my mask," says Donna Mealy, the principal second violinist. "Because, since I wear glasses, I'm discovering every time I take a breath my glasses fog up.

”It's the first rehearsal since February for the Topeka Symphony Orchestra. This season everything is different for TSO musicians. Each chair and music stand is positioned six feet apart to promote social distancing.

Mealy has been with the orchestra for 25 years. Like the other musicians, she had expected the 2020 season to be a big year for the TSO. It’s the orchestra's diamond anniversary.

But the COVID-19 shutdown brought plans for a season of glittery performances to an abrupt halt. Stages closed. Musicians stayed home and missed each other and their audiences.

Now, carefully, they are attempting to pick up where they left off.

“Well, here we are,” says Wiley Pickett as he steps up on the podium. “It’s really good to see you all. It’s been so long. I got my conducting bag out and it has Valentine’s candy in it. Someone gave me something on the last concert and that was the last concert, right?”

Big city orchestras, like the New York Philharmonic, hire full-time musicians. The TSO is a per service orchestra. This means players work on contract. They are paid only when they play.

“We're balancing the need to keep everybody safe, which is the first need," Wiley Pickett says. "But there's also the need to be performing, to be playing, to be having concerts so that the audience can come and support us, so that the players have their jobs."

James Mosher plays oboe and English horn. He’s been with the symphony for 36 years and is president of the orchestra committee.

“The first notes of the year, after so many months of not playing, things are sounding fabulous,” Mosher says.

Keeping safe is a numbers game. In a normal season, there’d be 65 musicians on stage. For this first concert, there’s just 32. The performing arts center holds more than 2,000 people. With the new social distancing restrictions, only 500 can attend concerts for the moment. 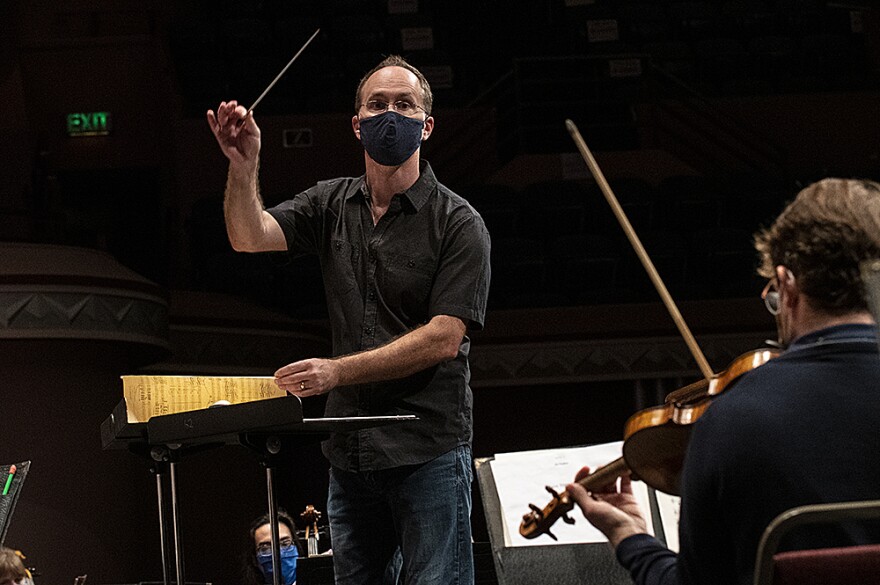 “We’re trying to keep things as COVID friendly as we can," says Mosher with a laugh. "And so we're keeping things to a minimum of players with this first concert, because we still don't know what's going to happen.”

Not all symphony patrons are ready to gather in a concert hall again. So the orchestra is live streaming all of its concerts.

“We thought it was really important to try almost everything to have a season this year because it is our 75th,” says Bob Keckeisen, the TSO’s executive director and principal percussionist.

“I've just been so anxious to get back and play again," Keckeisen says. "I have really missed this. I mean, we haven't performed a concert since February. And, you know, as musicians, that's what we do. That's what we live for.”

The planned gala anniversary celebration is on hold for now, Wiley Pickett says. But the orchestra is still doing important work.

The Topeka Symphony Orchestra plays next on November 14 at the Topeka Performing Arts Center.