An invasive species of grass is taking over pastures and grasslands. As David Condos of the Kansas News Service reports, some researchers and landowners are trying to stop it from changing the Kansas prairie forever — if it’s not already too late.

HAYS, Kansas — Keith Harmoney crouches down in a pale yellow field outside his office. He pushes back a cluster of tightly packed two-foot-tall grass, revealing the ground underneath.

In a typical native Kansas grassland, he’d expect to find roughly a dozen different plant species in the square foot of earth between his boots.

The invasive grass has turned this piece of northwest Kansas prairie into a monoculture, where a single species crowds out all the others until it’s the last one standing.

And as it creeps its way across the Plains, Old World bluestem is taking over more and more fields like this one. 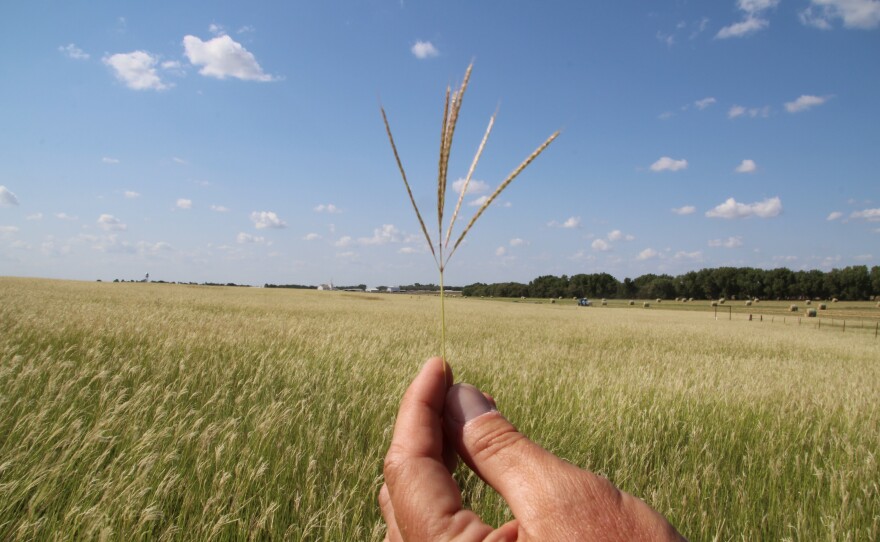 Harmoney, a range scientist at the Kansas State University Agricultural Research Center in Hays, is one of the people charged with finding ways to stop it. But he isn’t overly optimistic about his chances.

“It has the upper hand right now,” Harmoney said. "It kind of feels like the Old World bluestem is going to win.”

Decades ago, humans introduced Old World bluestem, or OWB, to this part of the Plains. But some of the characteristics that made the plant an attractive import — its aggressive growth, prolific seed production and hardy tolerance to drought, fire and grazing — are the same ones that make it so difficult to rein in. Once it dominates a field, it’s nearly impossible to eradicate.

Now, Old World bluestem is transforming pastures and grasslands into biodiversity wastelands. Some researchers and landowners are rushing to sound the alarm in hopes of helping more people understand how Kansas can keep this invasive grass from overtaking the state — if it’s not already too late. 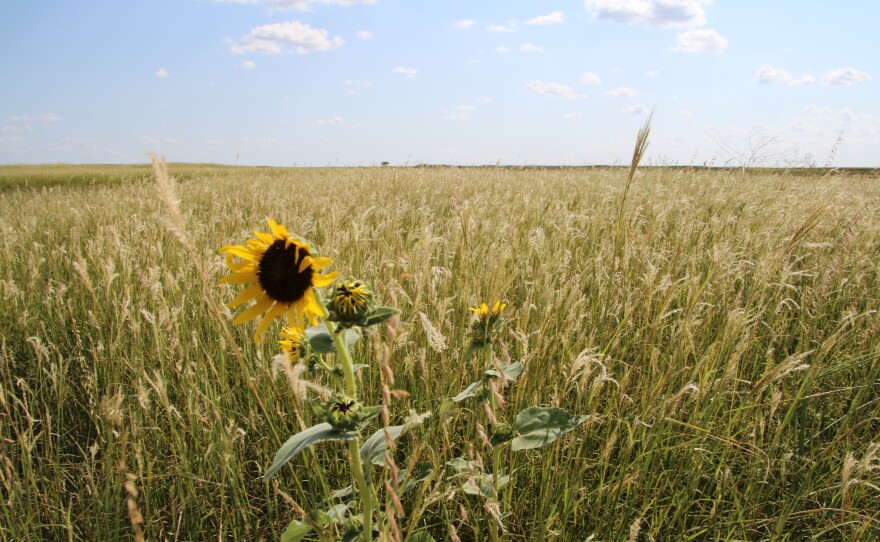 Both types of Old World bluestem growing in Kansas — yellow bluestem and Caucasian bluestem — are native to Asia and Europe. And like many invasive species, people brought them to the Great Plains on purpose.

The federal government planted OWB to rehabilitate land after the Dust Bowl. Highway departments have used it to control roadside erosion.

In the latter half of the 20th century, K-State’s research center planted the grass in Hays to study its potential for cattle grazing. The monoculture fields in the surrounding areas today stand as metastasized remnants of those studies.

Even the USDA’s Conservation Reserve Program has encouraged landowners to plant it widely, particularly in Oklahoma and other parts of the southern Plains.

Those purposeful plantings allowed OWB to get a foothold. And the invasive grass took off from there.

“It's highly competitive,” Karen Hickman, director of Oklahoma State University’s environmental science program, said. “It can outcompete and outgrow — and inhibit the growth of — other native plants.”

One of the more sinister ways the plant does this is by chemically changing the soil to be less habitable for neighboring vegetation.

The invasive grass releases substances, known as allelopathic chemicals, into the dirt that surrounds it. Hickman’s research shows that this biochemical warfare significantly inhibits the future growth, reproduction and survival of nearby native grasses.

Once an Old World bluestem infestation takes root, its impact on the native ecosystem can be dramatic.

“Native prairie is important to our system...from carbon storage to erosion control to pollinators,” Hickman said. “When we start forgetting that...that gets to be a sad day.” 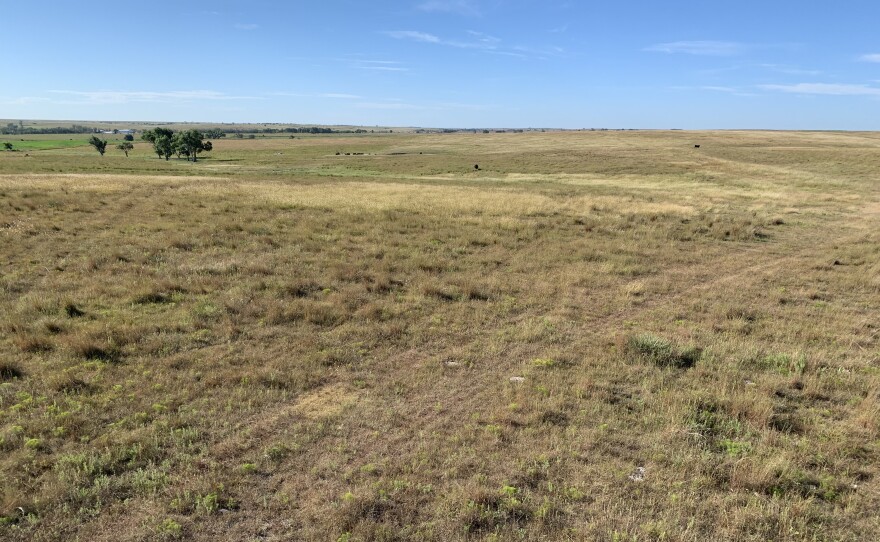 It’s not just about wildlife. Old World bluestem could also threaten ranchers' livelihoods due to the extreme cost of managing it once it's established.

Even though it has long been planted for grazing, it’s not generally as nutritious or appetizing as traditional Great Plains prairie grasses. So in pastures that include both invasive and native plants, cattle will often avoid eating OWB and overgraze the others instead. That can damage native species and give the invader another leg up.

Climate change may also benefit Old World bluestem. One of the plant’s weaknesses is that it’s less cold tolerant than native grasses. But as temperatures warm, its range could inch farther north. It’s now found in some parts of southern Nebraska.

Yet, humans continue to give Old World bluestem a helping hand.

Hickman said people commonly — and often unknowingly — spread its seeds along roadside ditches with mowers and across fields in the undercarriages of trucks and farm implements. The seeds can also travel from one property to another in contaminated hay bales.

Kansans can help keep OWB in check by removing any small patches that sprout up on or around their property and cleaning the seeds off vehicles before they drive through.

“As with all invasive species,” she said, “prevention is key.”

If someone discovers widespread Old World bluestem on their land today, their options for eliminating it are limited. Hickman said the best results are likely to come from some combination of herbicide, burning, grazing and tilling to try to push the invasive grass into decline.

But all that could cost tens of thousands of dollars, and even if those efforts succeed, landowners would need to remain vigilant for the plant’s return for years to come.

“It's going to require a long-term investment,” Hickman said, “and the fear I have is that no one's going to see the importance of that.” 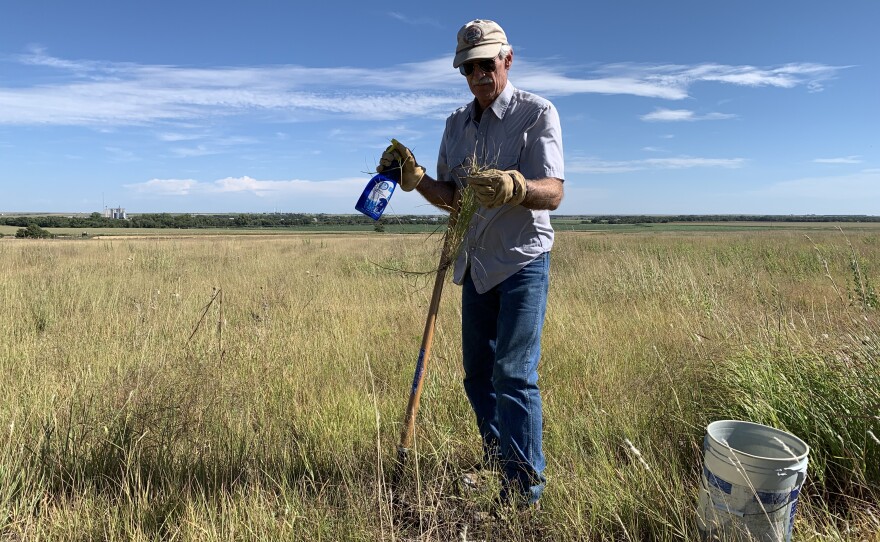 That’s the dilemma facing western Kansas landowners like Randy Rodgers: If you find Old World bluestem, how much effort do you want to put into getting rid of it?

Rodgers finished his career as a state wildlife biologist in 2010 and planned to spend his retirement fulfilling his long-time dream of caring for his land — a mix of pasture, prairie and farmland in southwestern Rush County.

When he began buying the property over a decade ago, he wasn’t familiar with the invasive grass. But a few years in, he realized it already covered large sections of his fields.

He decided to fight back, first with a backpack herbicide sprayer and then with his own two hands.

Over the past three years, he’s spent hundreds of hours pacing back and forth across his fields removing the remaining plants one at a time with a shovel and a bucket. He estimates he killed roughly one thousand Old World bluestems this way last year alone.

And even with all the time and effort he’s put into clearing the invasive grass from his property, Rodgers doesn’t expect to declare victory anytime soon. 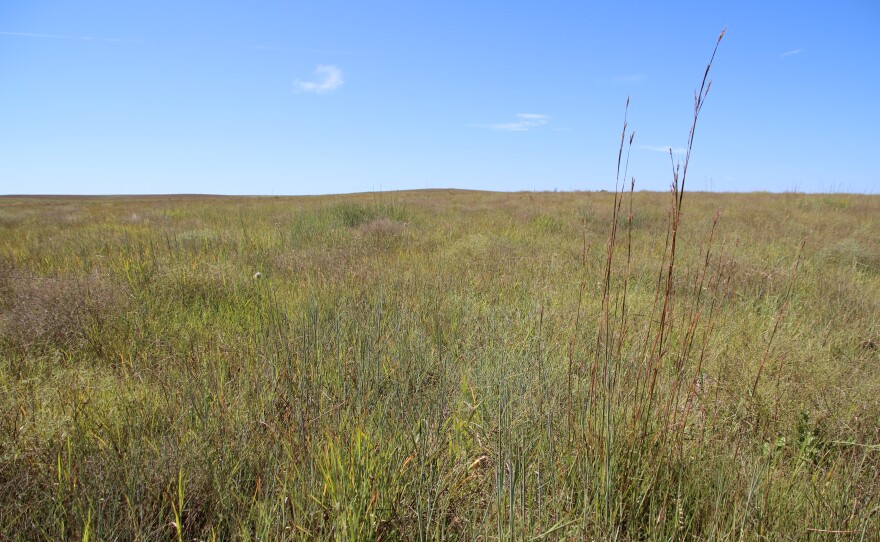 In Keith Harmoney’s research plots in Hays, Old World bluestems have grown at a rate of 15% compounded each year. And the plant is similar enough to native grasses that it largely avoids being singled out by herbicides, although a couple of the weed killers Harmoney studies show promise.

With the invasive grass already showing up in just about every county in the state, he said trying to slow down its spread may be the best case scenario for Kansas at this point.

“Exponential growth,” Harmoney said, “is probably what we're going to be seeing in the near future.”

The state has held at least one public hearing on potentially quarantining the plant. Harmoney said some Kansas counties have had discussions about designating it as a noxious weed, which would mean stricter regulations for limiting its spread, but none have taken action yet.

And as the Old World bluestem invasion continues, it endangers a lot of the natural features that make Kansas what it is. Tallgrass, mixed grass and short grass prairies — and the wildlife habitats that depend on them — will all be at risk.

“Long term, it has the potential to impact what we see,” he said, “and the beauty of (Kansas) as we know it.”